All those who are not one’s mahrams, are non-Mahrams!
So, who are Mahrams? They are those whom one can never marry. They are mentioned in the following verse which describes to a woman her mahrams, in front of whom she may take off her khimaar (head cover) or show any of her adornments.
Allah, may He be exalted, says: “And tell the believing women to lower their gaze (from looking at forbidden things), and protect their private parts (from illegal sexual acts) and not to show off their adornments except only that which is apparent (like both eyes for necessity to see the way or outer dress like veil, gloves, head-cover, apron, etc.), and to draw their veils all over Juyubihinna (i.e. their bodies, faces, necks and bosoms,) and not to reveal their adornment except to their husbands, or their fathers, or their husband’s fathers, or their sons, or their husband’s sons, or their brothers or their brother’s sons, or their sister’s sons, or their (Muslim) women (i.e. their sisters in Islam), or the (female) slaves whom their right hands possess, or old male servants who lack vigor, or small children who have no sense of the feminine sex. And let them not stamp their feet so as to reveal what they hide of their adornment. And all of you beg Allah to forgive you all, O believers, that you may be successful” [al-Noor 24:31] 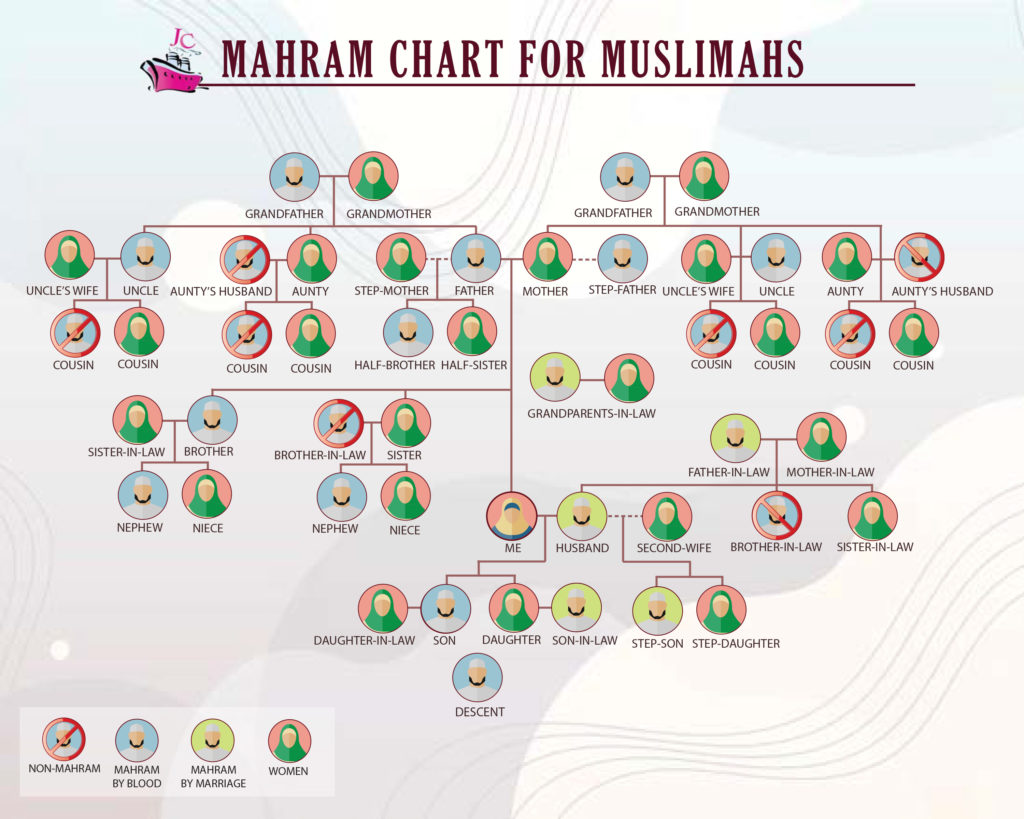 It follows that a woman’s mahrams are her:

Though the following are not to be considered as ‘mahrams’, one does not need to observe complete hijab in front of them:

Some people whom we wrongly assume to be our mahrams:

Can a Muslim girl have a boyfriend?

If all of the guidelines mentioned are followed- would that leave any chance for a Muslim woman to have a boyfriend?!?!?!
Allah – the All-Knowing (Al-Aleem), All-Wise (Al-Hakeem), the Most Merciful (Ar-Rahmaan], the Most Generous (Al-Kareem), Our Rabb, Who nurtures us, cares for us, teaches us, our Guardian (Al-Wakeel), who protects us, and takes care of all our affairs – is the One Who has given us these limits with respect to our non-mahrams. He is the One Who created us, and He knows what is best for us. Shaytaan, the accursed, wants our hearts to be busy, sad, fearful, drunk in this world, so that we are unable to worship Allah.
What begins as a crush can consume all your waking thoughts and nighttime dreams, to the extent that it distracts and contaminates your worship of Allah – a result which greatly pleases the Shaytaan. Thought leads to speech, speech to proximity, proximity to touching, touching to holding, and all the while, at every step, Shaytaan whispers encouragements to you, justifies and beautifies your actions to you, until your sins accumulate and grow more serious while you perceive them as good or permissible deeds. May Allah protect us all! Sins only bring hurt, heartbreak, sadness, embarrassment, deception. And Shaytaan LOVES for us to go through all these emotions, and for us to be BUSY and PREOCCUPIED with this mirage, that we forget the reality.
If we leave ourselves to sin- then who will protect us? If we do not have Allah as your Guardian, what do you think will happen to us?
Allah says in the Qur’aan, “Bad statements are for bad people (or bad women for bad men) and bad people for bad statements (or bad men for bad women). Good statements are for good people (or good women for good men) and good people for good statements (or good men for good women)” (Surat An-Nur 24:26)

Therefore, we must keep ourselves pure, and Allah will present us with someone pure, while if we engage in shamelessness and indecency, then we will have a similar spouse in the future.